“Rebuild MBR” feature will rewrite the Master Boot Record of the selected disk to fix some boot errors without destroying the disk partition table.

A master boot record (MBR) is a type of boot sector at the beginning of many types of computer mass storage. It is most common on disk drives large enough to be partitioned, hence it is not usually present on floppy disks or small thumb-drives.

The master boot record was popularized by the IBM Personal Computer. It consists of 512 bytes located at the first sector of a data storage device such as a hard disk. MBRs are usually placed on storage devices intended for use with IBM PC-compatible systems.

The MBR may contain one or more of:

Because of the broad popularity of PC-compatible computers, the MBR format is widely used, to the extent of being supported by computer operating systems in addition to other pre-existing or cross-platform standards for bootstrapping and partitioning.

If the boot record was corrupted, you cannot boot the computer successfully and you’ll receive the errors such as “Operating System not found” or “system missing”.

How to rebuild MBR? 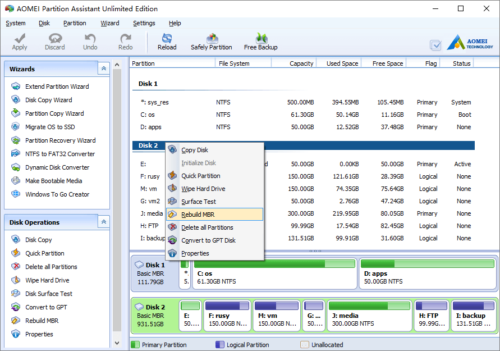 In the pop-up window, choose a proper MBR type according to your operating system. 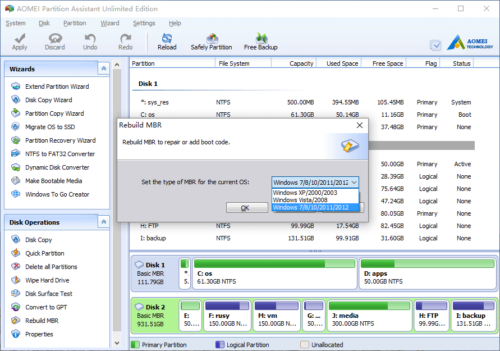 Click OK and back to the main window, press “Apply” button on top left to proceed.